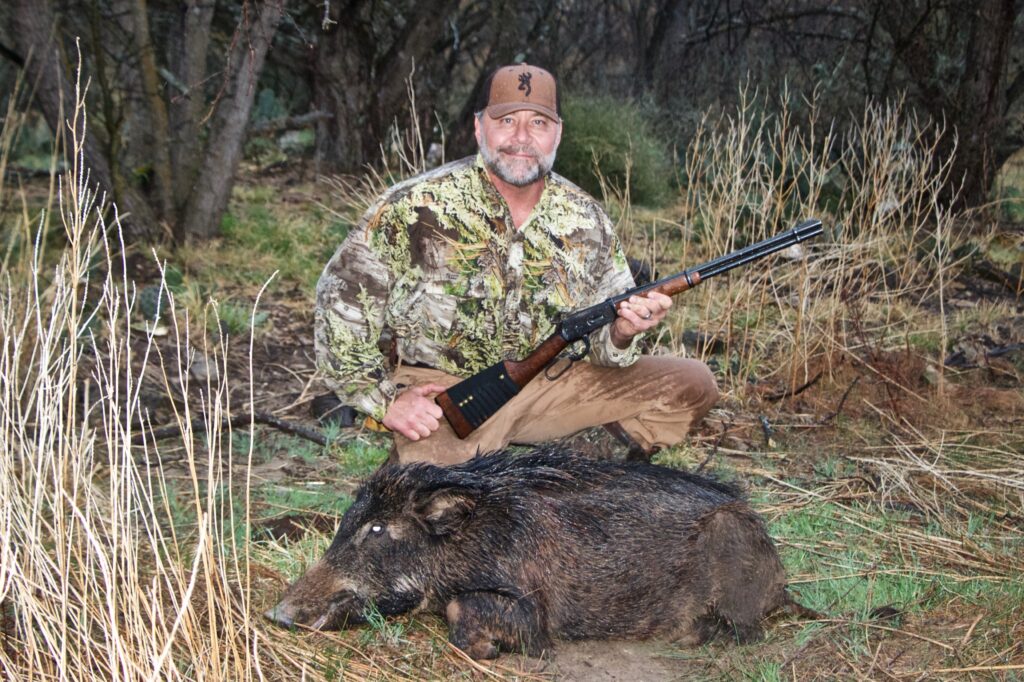 I glanced at Stephanie and David Murphy.  The four of us were hunting on property managed by H3 Whitetail Solutions. We were hunting turkey, wild hogs and if the wind died down hoped to also call coyotes with my new Burnham Brothers Ultra-Sonic Freq electronic call.

Since our arrival on the ranch near Throckmorton (Texas) the wind had been blowing in excess of 20 miles per hour, out of the south. That night the wind was supposed to blow every bit as hard and continue doing so for the next three days, but then out of the north-northwest.

I glanced at the Freq on the back of David’s Can-Am side by side. With such high winds, there was no reason to even attempt to call predators.  “There’s a feeding area at the end of the lane we’re on.  It goes almost to where you shot your 10-point in December then turns toward the power line right-of-way.  Just to the left is a stock tank.”

It started raining, a lightly at first.  Approaching the power-line I recognized the area.  “This is where we rattled in those two coyotes and would have gotten stomped and gored by that tiger-striped bull had he not been on the other side of the fence.”  Brandon smiled and nodded affirmatively.

Our intention was to try to call a gobbler for Stephanie.  Brandon selected a set up where he could set up his gobbler and hen decoys where they could be seen by any approaching gobbler.  “Have seen numerous gobblers in this area.  Two days ago I heard six to eight gobblers in this area.”

Sounded promising!  No sooner had Brandon started yelping on his diaphragm than a gobbler answered.  He was likely less than a couple of hundred yards away.  Brandon called sparingly.  At first it sounded as if the gobbler was headed our way.  But then, the gobbler started drifting away, his gobble sounding fainter each time he did.

David and I had stayed back away.  It was then I noticed the rifle he carried was a Winchester Model 94, no doubt a pre-’64, meaning built by Winchester before 1964.  I glanced at the cartridges in the shell holder on the buttstock. They looked like the rimmed case of a .30-30 Win.  I suspected they were Hornady’s 160-grain, FTX (Flex-Tip), Leverevolution loads. 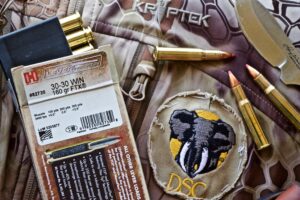 When nothing came to Brandon’s excellent calling, I asked David and he confirmed they were indeed Hornady Leverevolution.

No sooner had we started walking, the rain started falling harder.  We were about a quarter of a mile from the side-by-sides.  The pond Brandon wanted to check for hogs was a hundred yards away.  We were already wet, so decided to walk to the pond before heading back to the vehicles.

We approached from below the dam, eased on top of it and started glassing the opposite bank.  The rain started falling in big drops that were really close together.  It was raining really hard!

I spotted movement directly across the water, easing out of the brush. It was a dark colored hog, quickly followed by four more dark, good-sized sows, accompanied by no less than a double handful of small pigs.  I shielded my camera best I could from the rain and started filming for our weekly “A Sportsman’s Life” show on CarbonTV.com.  Glancing at the other three hunter I realized they had not yet seen the hogs.

I hissed loudly to get their attention, then, set up my shooting sticks and motioned Stephanie to move forward to shoot one or more of the hogs.  She was carrying a semi-auto topped with a scope, not a Trijicon. When she tried to turn the reticle on, she could not do so.

The hogs had no idea we were anywhere near, thanks to the hard driving rain. But, they were also acting nervous.  Seeing Stephanie would not be able to shoot, I motioned for David to come up to the shooting sticks.  In spite of the now torrential rain, I really wanted to film what was about to happen.  Too, I was carrying my Taurus Raging Hunter .44 Mag topped with a Trijicon SRO red-dot sight, loaded with Hornady’s 240-grain XTP ammo.  The distance was well beyond a hundred yards. I was not certain I could make the shot due to the distance and especially the pouring rain.

David moved forward, set the open-sight Winchester on the shooting sticks and sighted down the barrel.  Looking through the camera the rain increased in drop size and intensity.  I concentrated on the hogs, awaiting David’s shot.  When he did not shoot, I looked his way. The rain was falling so hard it was pushing the bill of his cap down, interfering with his ability to see the front sight.  I saw him push up the bill of his cap.  I concentrated on filming.

Moments later the shot sounded. The hog I was concentrating on through the camera dropped in its tracks, kicked twice and did not again move.  Soon as he shot I heard David work the lever and seat another round, just in case it was needed.

We watched the down hog, thru driving rain, for easily 30-seconds before David turned my direction.  I shook his hand in congratulatory manner.

“That was one fabulous shot!  How far?”  I asked.  At that point, David ranged it with his range-finding binoculars.

“One hundred thirty-seven yards!”  Both Stephanie and Brandon walked to where we stood and started congratulating David as well, and, for good reason.  David had made a tremendous shot, considering he was using an open-sight rifle in extremely “rough” shooting conditions.  Frankly the rain was falling so hard I was surprised he could see sights and target. 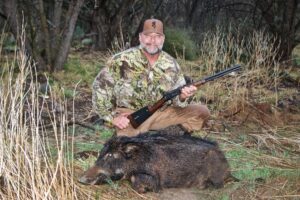 A few minutes later we drove the side-by-sides to where the hog lay.  It was a dry sow, likely weighing about a hundred-twenty pounds.  It was shot perfectly through heart and lungs.  Knowing David was shooting Hornady’s FTX bullets I had hoped the bullet had stayed in the body so I could recover it to see how it had terminally performed.  The bullet had exited the opposite side, but, destroyed both heart and lungs.

After several photos of David, his hog and his Model 94 .30-30, we properly took care of the hog.  No less wet than if we had jumped into the stock tank, we loaded all and headed toward camp as the rain continued falling.

In dry clothes, we gathered around the dinner table to discuss the day’s events.  I questioned David about his rifle.  “My dad gave it to me years ago.  I carry it occasionally because it’s easy and quick to handle and hunting like we are here at ranges usually well less than 100 yards it seems like a proper choice and because my dad gave it to me!”  He continued, “I got in touch with Winchester regarding the rifle’s serial number. It was made in 1902.  I suspect if it could talk, it could and would tell some interesting tales.”  A breath later he added, “The rifle’s history with my dad and now mine, makes it all the more special. I have to say I am impressed with the Hornady’s Leverevolution accuracy and how it performed on that hog.  Hunting with my Model 94, .30-30 is like taking a step back, but, using today’s perfect lever action ammunition.”