Rattling in the Bull of the Woods

Rattling in the Bull of the Woods

“We have not hunted that part of the ranch in quite a while!  Have left it as a sanctuary.” Explained Brandon Houston pointing toward a large expanse bordered on on side by a rocky ridge and on the other side a free-flowing creek.  “If you’re interested we make an exception about hunting it this morning, to see if we can rattle in anything.”  I nodded approvingly.  “That said, we’re on the tail end of the rut here. Bucks have been chasing for a while and they may be pretty tired by now.”  He continued, “As you saw this morning, they still bristle-up when approaching each other, and they do look like they’re still interested in chasing does, but I’m not sure they are still interested in fighting.  Last time I rattled in a buck was over a week ago.”

“Won’t know unless we try!” I added while grabbing my rattling horns and shooting sticks from the back of his Mule.

Rattling in bucks the past many days had been extremely trying for me.  On a hunt in early December hunting just north of the western Texas town of Ozona in Crockett County, there hunting with Joe Reed’s Nomad Outfitters, I tried rattling several set-up.  On the first one I rattled in seven bucks, mostly young ones, but also one nicely antlered buck, a massive ten-point that looked to be on the cusp of being a mature deer.  Joe had asked I concentrate on taking at least a 5-year old deer.  This buck looked like he was probably not quite that old.  And since I had three more hunting days I decided to pass him.  All those bucks had come running in, save for the massive ten-point.  He came slipping in quietly, circling to get downwind of us as particularly mature bucks tend to do.  I was not really concerned about him smelling me, having applied an ample amount of TRHP Outdoors’ Scent Guardian. 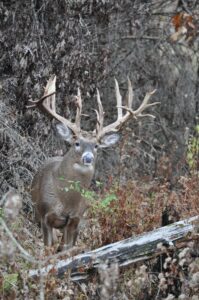 That ten-point stopped directly downwind of us, stood there and stared trying to figure out why he was not seeing two bucks in combat.  I kept his attention with vocalizations, some sounding like another buck, and others simply to “play with him” and see how he reacted to not necessarily sounds a deer would make.  After a full five-minutes he finally turned and walked away, almost as if he was shaking his head trying to determine what had just happened.

I had initially set up so I was essentially looking downwind, but with shooting lanes both to the left and right of downwind, a set up I always look for when rattling.  After waiting an additional twenty or so minutes after finishing my rattling sequences we walked about a quarter mile to a second location I wanted to rattle, based entirely on the map Joe had shown me.  It was where three wide canyons came together and “spilled” into the lower country.

Just as I was about to where I wanted to set up, I spotted a buck.  I could not see his head and antlers, but could his hocks and tarsal glands, which were darkly stained; almost always the sign of a mature buck.  Upon seeing the buck, I eased back a bit, found a place to set up where I could see into the three drainages and started rattling.

Two bucks charged directly toward us, both obviously young 8-points.  They nearly ran over me, passing less than six feet to my right.  Once they did I looked back at Jeremiah Bennett, cameraman for Safari Classics and “Trijicon’s World of Sports Afield” I do some shows for each year.  Jeremiah was all smiles.

I kept rattling and saw movement in the cedars at the mouth of the left canyon.  A really nice, though likely young 8-point.  He strode out of the cedars and oaks boldly coming toward me, all “bristled up”, eyes bugged, drooling, head and rack raised high and ear pinched against his neck.  He unfortunately stopped behind a cedar where Jeremiah could not get the camera on him, and stood there a full five minutes before turning and walking directly away from us. 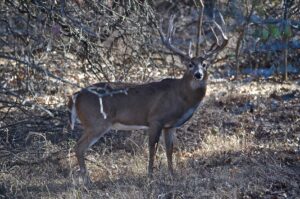 Just as he as about to disappear, hopped to his right and stared into trees.  No doubt he had spotted a buck that caused him to pause, then change the path he was on.  I suspected he might indeed be a big mature deer.

Through cedar I could see parts of his rack, it looked massive.  His body was totally obscured by dead branches.  He was looking our way.

I did my best to entice into an open area.  But, that did not happen.  After staring our way for nearly five minutes, he turned and was gone.

Wish I could tell you after that little episode, there were more rattling successes to talk about.  Well actually there were, just about straight up noon.  I rattled in a couple of youngsters, small of body and antlers.

I spent the rest of the day doing by best to imitate bucks fighting, all I got out doing so was sore forearm muscles.

Fast forward a week.  First light caught me in a dense South Texas Brush Country thicket trying to rattle in a mature whitetail for Hornady’s Neil Davies.  Our first set-up I would have lost money betting one or more bucks would respond to my rattle efforts.  The set-up was perfect! The light cool breeze was perfect!   And the timing for rattling, the second week of December, should have been perfect as well.

Guess what!  Nothing responded!  We moved about half mile to try a second set-up.  Just as I started my second sequence I saw the slightest movement to my left, deeper into the thorn brush thicket.  I could see a swelled neck and a part of the buck’s rack.  What I could see looked like he was not overly wide, not overly massive, but tall with long tines, and numerous of them! All looked good except the near solid wall of thorns and limbs that separated Neil and the buck.  I tried to entice him closer and to have him approach from another direction…But, it didn’t work.

As luck would have it, that was the only buck I was able to rattle in while hunting there for that one day.

Fast forward to hunting North Texas with Brandon Houston.  He and I walked to the edge of a ridge from the bottom side, where two draws combined to form one.  The wind blew from the draws to us.  Most likely any buck that might respond would expose himself when he responded.  After letting Nature’s sounds return I started meshing my rattling horns.  Immediately there was movement to our left.  A coyote came at a run.  Then a second appeared.  They stared in our direction then turned and walked away.

I continued rattling, now also grunting like two bucks engaged in mortal combat.  Back in the draw in front of us, although obscured by brush and cactus I could hear something coming our way.  It sounded big and like it was coming to whip any and all takers!  I glanced over my shoulder at Brandon who was manning a camera filming for our “A Sportsman’s Life” seen on CarbonTV.com, and smiled while nodding my head in an approvingly manner. Then, immediately started working the horns with more force and grunting louder.

I heard what sounded like a faint grunt, heavy steps heading our way.  I could hardly wait to see the “bull of the woods” that was headed our way.

Just then there was movement behind brush and cactus closer to us… Again I looked back at Brandon and grinned.  It was working!

Finally, I was going bring in a big animal!

Then…out stepped the true bull of the woods, of the bovine variety!  And, he was mad and upset at our presence! Had it not been for the five-strand barbed wire fence that separated us from the bull, both Brandon and I would have been running backwards!

Protected from being trampled by the bull, both Brandon and I laughed!  What else could we do?